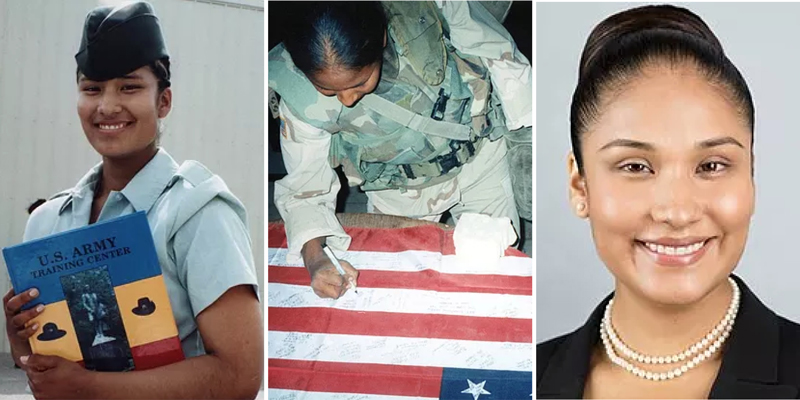 Originally published May 24, 2018 on thebgguide.com.

I used to ask: “How am I so invisible but still a target?” Now I ask: “Why am I the first to be seen, but the last to be recognized?”

To understand the chasm between these two questions, let me begin by sharing my journey of military service, and how my experiences serving the red, white, and blue – while brown – planted the seeds of my political activism.

I joined the Army as an ammunition specialist 3 days after high school graduation, 1 of 4 women surrounded by 200 men. In the military, rank is power – and I, a woman, brown-skinned, and enlisted, had none. Let me be clear: the military taught me lessons about life and leadership I carry with me to this day. But racism and sexism infects even those who protect the land of the free.

I learned I was disposable – that my only value was in how quickly I executed orders and followed regulations. To survive, I learned how to navigate the landmines of race and gender in an institution that sought to strip me of my humanity.

I was a soldier in every sense of the word, but the cost was my own sense of self. I became invisible. To be seen is to be alive, and for me to live, I had to find my voice. And so, I crawled to the edge of my own existence to find myself. It was terrifying, liberating, and complicated, but I learned what set my soul on fire.

When I returned from Iraq and left active duty, I embarked on my new mission: to serve the marginalized and the underrepresented – because I understood the intensity and depth of that pain. I studied criminal justice and political science to better understand how power structures governed society. I pursued graduate degrees in public policy, public administration, and urban planning, each offering different perspectives on the relationship between government, policy, and politics.

Throughout my 15+ year career as a public servant, I’ve been driven by the belief that government is based on the power of the people and that America’s communities deserve meaningful engagement with a responsive government.

As such, my purpose has been to strengthen that engagement by driving public policy and programs that effectively address the needs of various constituencies – from local neighborhoods to the corridors of Capitol Hill

Along the way I’ve learned a few key lessons on maximizing social impact while maneuvering within systems that were not designed to include or elevate us.

Define Political Power: This concept holds different meanings to different people in different spaces. What does political power mean to you? Is it being a grassroots activist and organizing people on the ground to hold political leadership accountable? Is it being an elected official and passing legislation that solves problems and increases the quality of life? Is it being a private citizen showing up each and every time at the ballot box? Is it something else? Whatever political power means to you, it’s important to define it first because it influences how and where you express your activism.

Build Your Arsenal. Now that you have a clear understanding of what political power means to you, what are the tools you need to exercise it? Grassroots activists use different skills, resources, and networks to achieve their advocacy goals than government bureaucrats, political operatives, or private citizens. No matter how you define political power, you will need an array of resources to exercise it. Identify what will best prepare you for the political road ahead and build your arsenal accordingly.

Deploy Your Advocacy Tools. Finally, now that you have built your arsenal reflecting your understanding of political power, it is time to move from strategy into tactics. What tools can you use from your fully stocked arsenal to achieve the “win” (whatever it may look like)? Are you trying to pass or defeat a legislative bill? Maybe you’re trying to organize your local community around a neighborhood issue, or perhaps your interest is completely different! No matter how you choose to frame victory, understand that every tool and tactic in the toolbox is not for everybody, and that’s okay. What is most important is that you feel connected to the work you do. Your personal agency of defining political power and selecting the tools you use, reflect who and where you are as you embark on any political venture.

As Black and Brown women, more often than not, we are invisible targets. Our challenge has always been how to fight for the recognition of our humanity while protecting ourselves against the endless assaults against it.

In my journey, these lessons have equipped me with the (self) knowledge, skills, and audacity to expertly move in spaces never created for us. While there will be times of frustration, anger, and deep disappointment no matter your chosen path of advocacy, always remember that I, along with so many others, are walking with you and cheering for you every step of the way.

Sending all of you love and light to guide your journeys.

Schedule a consultation to discuss the needs of your non-profit or advocacy campaign.
Reach Out Here
Copyright 2022, Na'ilah Amaru. All rights reserved.
Back To Top